Can you imagine mobilizing hundreds of thousands of workers – including the top engineers of the day – and putting them to work for FORTY YEARS to build something that you then BURY?

First, he unified China. (China gets its name from him.)

Then he ordered the creation of more than 7,000 life-size soldiers, horses, and chariots made of clay, which he then installed in a giant tomb to “guard” his corpse in the afterlife.

The statues average six feet in height and weigh 300 pounds. There are archers, infantrymen, cavalry, charioteers, and army officers. Every soldier has a unique face… like they were maybe based on real people. They are exquisite. 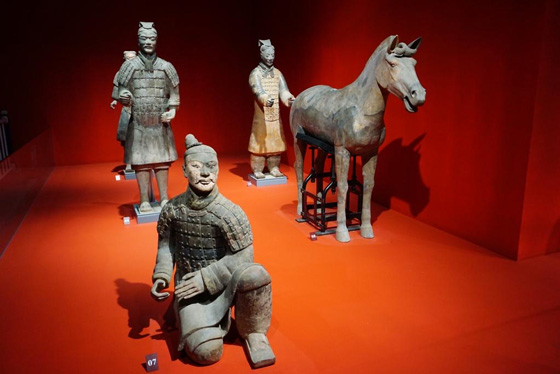 7,000 of these 300-pound statues were meant to guard Emperor Qin’s corpse in the afterlife

They call it the eighth wonder of the world.

(The story doesn’t end here. I’ll tell you what happened next in a minute…) 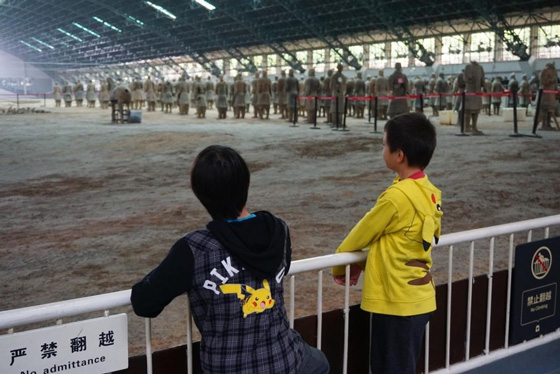 From Hostel to Hostel

We’re traveling around China on the high-speed railway. We stop now and again to stay in a hostel for a few days, catch our breath, eat some noodles, and check out the local scenery. Then we move on again.

We’ve covered more than 2,000 miles so far and stayed in a dozen different hostels.

We’re currently in Xi’an, a city of 12 million people in the middle of China, near where they buried Emperor Qin and his Terracotta Army.

Next we go to Beijing. Then we go to Hong Kong after that.

Except the terracotta statues of the 21st century aren’t made of clay. They’re built of steel and cement…

They’re everywhere. In every city, in every town and in every village. Sometimes, we even see them in the middle of nowhere. They build them in mini-cities. Dozens of identical buildings of exactly the same height and design, placed in neat rows.

Some look old. Some look new. And a lot of them are still being built. As I write these words, there must be over 10,000 high-rise apartment buildings under construction right now in China. You can spot them by the cranes on their roofs. We look for them out of the train window every time we roll through a new town.

Incredibly, despite all these new apartments coming onto the market each day, prices are still rising. Our friend Jessica owns an apartment here in Xi’an. She tells us its price has doubled in the last three years.

Then there are all the new roads, expressways, tunnels, bridges, railways, train stations, subway systems, power plants, and so forth that they are building…

It’s an incredible thing to behold.

And China gets the money to pour all this cement and dig all these holes by borrowing from its banks.

Look at this chart. It shows the growth of China’s, America’s, Europe’s, and Japan’s banking systems over the last 10 years. 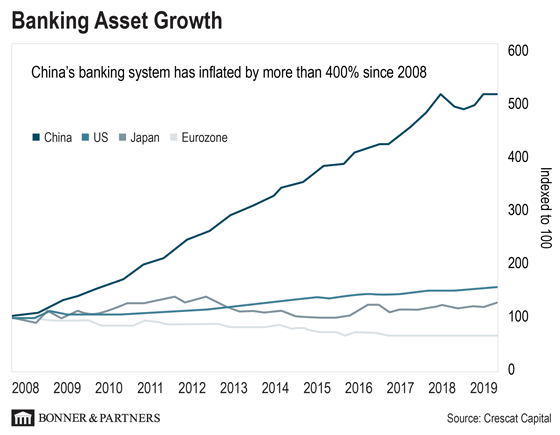 China’s economy is 36% smaller than America’s by GDP, yet its banking system is now 2.2 times bigger. The four largest banks in the world are Chinese banks.

The big questions are: Are these projects going to be economic? Or will they turn out to be wastes? And what’ll happen to all the loans China’s banks have made?

Kate and I have noted a lot of the buildings are empty. We can tell they are empty by either getting up close… or by looking for dark buildings at night.

We’ve also noticed a lot of empty seats in the railway stations.

This month, China reported its slowest economic growth since 1992. Meanwhile, according to Reuters, prices are falling at the factory gate but rising for the consumer. That’s a bad combo.

“China’s central bank made an unexpected Rmb200bn ($28bn) injection into the banking system on Wednesday, highlighting policymakers’ concerns over liquidity levels as economic growth falls to a 30-year low,” says the Financial Times.

We won’t know how this story ends for a while, but I can tell you what happened to the Terracotta Army…

The year after Emperor Qin died and they buried the army, there was an uprising. The government was overthrown. Marauders broke into his tomb, destroyed all the terracotta statues, set it all on fire, and then left it for the weeds to reclaim.

In 1974 – more than 2,000 years later – some farmers were drilling a well in a field when they found some broken pieces of pottery. They dug a little deeper and found themselves in a cavern the size of an airport hangar filled with broken clay soldiers.

They call it the greatest archaeological discovery of the 20th century. Today, it’s one of the main tourist sites in China, receiving over 20 million visitors a year…

Reader question: I’m loving your Postcards From the Fringe. I can’t wait to read your next adventure. One question for you: Have you considered lending Kate your pen? I would love to hear her thoughts on your travels.

Tom’s response: I just read your note to her out loud. “Maybe one these days…” she says.

Reader comment: Tom, when I first started getting your postcards, I thought they were just more junk mail and deleted them. But now I know better and look forward to your regular posts.

Reader question: I was telling my kids, ages 15 and 12, about your family’s lifestyle living in different locations, being homeschooled, and getting various experiences. My kids say they could do it, but just for a couple of weeks, because they would miss their friends. So my first question is, Do your kids miss having friendships outside their immediate family?

My next question is, What do you think about silver as an investment? Do you think silver will reach $30? Thank you for the interesting read!

Tom’s response: Yes, the kids miss having friends. It’s the one thing that would stop us living like this permanently. Our kids are a bit younger than yours, so the feelings are probably not quite as acute as they would be for your kids. But it’s definitely still an issue.

By the way, I’m so happy and honored to read you’re sharing these postcards with your kids.

I like silver. It’s a core holding in our portfolio. I expect it’ll make new all-time highs by the time this great financial experiment has run its course.

Reader question: As with everyone else, I really enjoy your daily updates. I guess we can all travel the world vicariously through you! I thought I had this Dow-to-Gold ratio philosophy down. Then, I picked up some “vibes” that indicated that we will go from our current “light inflation” environment to a deflationary environment. Can you clarify these stages and what will happen to the Dow-to-Gold ratio during the deflationary environment?

Tom’s response: The beauty of my Dow-to-Gold bet is you can put away the newspapers and give up watching the macroeconomic wrangle between inflation and deflation. We’re making a simple bet gold outperforms stocks, which it might do under either deflation or inflation. So buy gold now, wait for the Dow-to-Gold ratio to hit 5, then buy stocks. It’s that simple.

Reader question: I read your postcards regularly with interest. About gold: I wonder where and how you will sell your gold when it comes time to sell?

Tom’s response: I get this question a lot. With the Dow-to-Gold ratio below 5, gold should be in a buyers’ market. In other words, lots of eager buyers. We should have no problem selling our gold.

Keep your questions and comments coming at [email protected]. Kate and I read every note you send in.