The Baltic Dry Index shows shipping rates for moving cargo across the oceans. It has plunged… 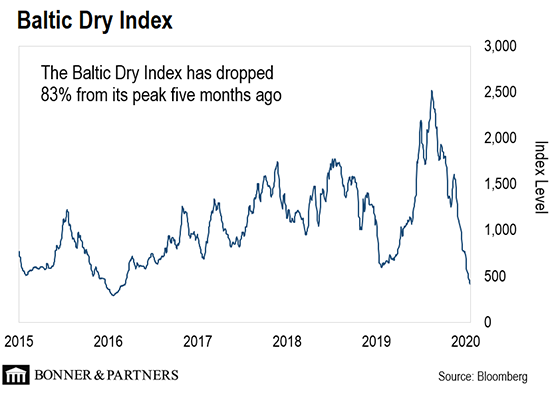 This weekend I read that Ed Hyman – one of my favorite economists and one of the most revered analysts on Wall Street for the past 30 years – is forecasting that China’s economy won’t produce ANY economic growth this quarter.

Here’s another worrying development. The factories that make the iPhone and iPad have been shut down indefinitely…

If the world economy was an animal, China’s economy would represent its heart.

It receives the vast share of the world’s basic materials, then it builds, constructs, manufactures, produces, and emits finished goods to the rest of the world.

Today, China is closed for business. Or said another way, the world economy just had a heart attack…

Behind that economic activity, though, China is the poster child for debt-fueled over-capacity, leverage, and bad loans. This sudden collapse in business activity is not going to end with a soft landing…

(Kate and I spent two months in China before Christmas. I documented some of the crazy projects we found – here, here, and here, for example.)

My family and I are squatting in an empty apartment we’ve borrowed temporarily. We’ll be here another 10 days or so then we’ll have to hit the road again.

Kate and the kids have caught a sick bug. I’m sitting at my desk writing this by hand while the rest of my family is in bed, coughing and sniffing.

I’m fine… except I’m anxious about the reports I’m reading from China and what they mean for us.

I still can’t believe this is happening.

As I’ve written many times in these Postcards, we’re in a “valuations bear market.” I expect we’ll see several recessions over the next decade as the stock market burns off its ultra-high valuation levels.

The first recession is – probably – arriving now. And like I predicted here, China is at the root of it.

Also, I expect we’re about to see another massive dose of printed money – the biggest ever – injected into the global banking system.

Not just by the Chinese authorities (who started injecting fresh liquidity into the system last week) but also by the Japanese, the Europeans, the British, and the American authorities, too.

The stock market is at risk of collapsing… but like one of those 3D movies where you have to wear red and cyan glasses… this crash will mainly be visible through gold.

Here’s the chart of the Dow Jones in terms of gold, what I normally call the Dow-to-Gold ratio. It peaked in October 2018 and it’s been drifting lower for the last 15 months. 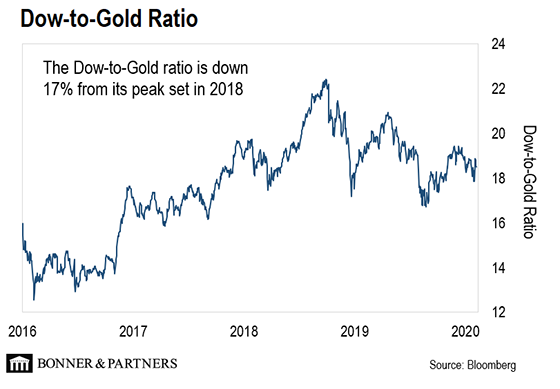 I’ll continue to publish this chart every few days. Keep a close eye on it.

Our whole paper currency system is also at risk of collapsing. As with the stock market above… this is also best viewed through the lens of gold.

A flight to gold is happening all around the world. We just don’t hear about it because it hasn’t soared past its all-time high in dollars, yet. 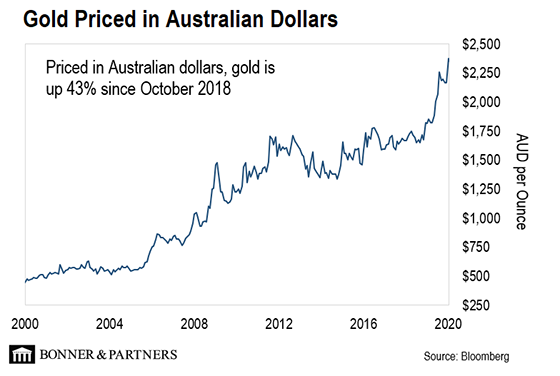 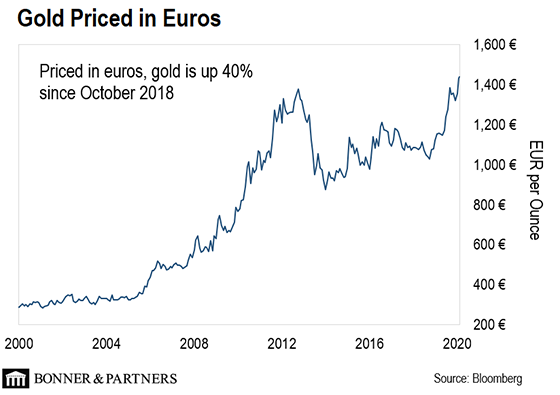 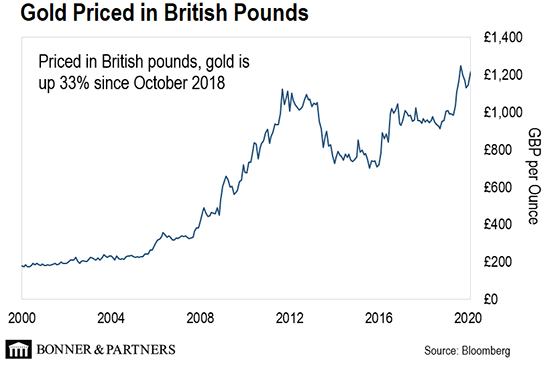 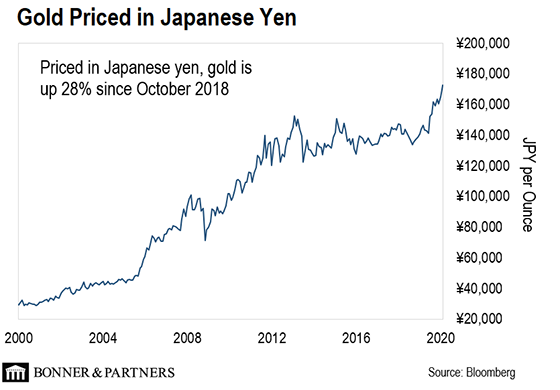 And here’s gold in Canadian dollars…

The charts are unequivocal when you look from the perspective of gold. Stocks are falling… and a synchronized global currency devaluation is beginning.

P.S. For a breakdown of the “valuations bear market” I described above – and why we want to sit on the sidelines in gold – catch up here, here, and here.

On readers’ minds today: gold… the Dysons’ nomadic lifestyle and how it affects the kids… Tom’s penchant for train-hopping (read the latest here, here, and here)… and whether America is headed toward hyperinflation…

Reader comment: I’m an avid and appreciative reader. I just put 20% of my portfolio into gold.

Reader comment: Hey Tom, loved your stories about hopping freights. Hopped my first on a dare. 12 years old. Rode from one side of town to the other.

My best was with two friends looking to catch a ride from Omaha out to the coast. We ended up on a hotshot going to Oakland. This was in the late sixties before the car carriers were all wrapped up.

Armed with a slim-jim, we opened up a couple of new Pontiacs and rode in style all the way out to the coast.

Reader question: Why do you, Kate, and kids continue to live like nomads? Now with all this travel experience (yes it’s educational and a great experience), is it fair to your kids to not live in an everyday social community in a home or farm atmosphere?

Tom’s response: We’re coming to the end of this nomadic phase. Just a couple more places we’d like to visit first. Then I expect we’ll find somewhere to settle down and be part of a community, which we both would value.

Reader comment: Hi Tom and family, I have really been impressed with your travels and enjoyed your postcards. It makes me jealous, in a good way, of your courage to go forth and travel like that and face all the unknown.

I am still young enough to have aspirations to travel and just go with the wind myself. All the best to you and your family!

Reader comment: Doesn’t devaluation of the dollar mean hyperinflation, like in Weimar Germany, and later in Zimbabwe and Venezuela?

You and Kate were smart to buy gold already, when money had more value than gold. Enjoy!

Tom’s response: This is the $40 trillion question. My guess is, they’ll never let it get that far.

There will come a point where the cost of inflation outweighs the benefits… probably when inflation gets into double digits… and they’ll have to close the taps and save the bond market from total destruction. We’re not there yet, so we don’t have to figure out the answer yet.

Do you have questions I didn’t answer today? As always, please keep writing us at [email protected]. Kate and I read every note you send us.