It cannot function in a world where foreign governments are not adding Treasury securities to their balance sheets. And that hasn’t been happening since 2014.

So in September 2019, the Federal Reserve began its long, slow, soft bailout of the government…

This chart is all we need. It shows the total assets of the Federal Reserve… 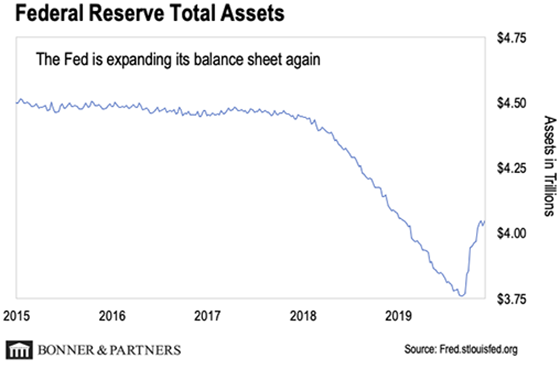 If I’m right about this bailout, we should see this line quickly rising over $5 trillion.

And if there’s a recession or a bear market, this bailout will speed up by an order of magnitude.

That’s because the government’s tax receipts are closely tied to the performance of the stock market and the economy.

The stock market is so important to government finances, if it starts to fall, the Fed will probably prop it up. Same with the bond market.

The asset it’ll sacrifice is the dollar. Trump’s already been advocating for this. And that’s why gold is the correct bet now.

The Chinese and the Russian governments. They’ve been buying tons and tons of gold.

The chart below shows the growth of China’s and Russia’s reported gold reserves. (It’s rumored China has far more gold than it’s reporting.) 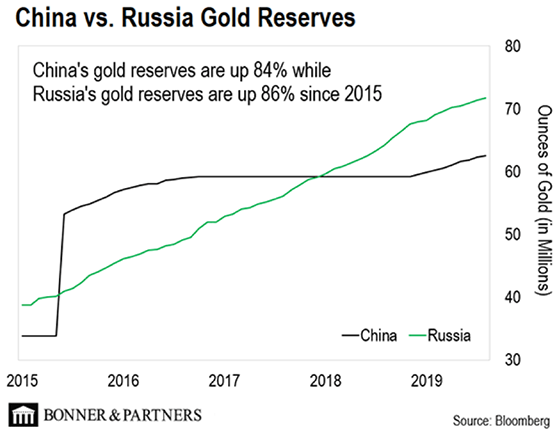 Why would they be doing this if they weren’t expecting a devaluation in the dollar?

They can see where this is going. Just as I can. Just as my colleagues Bill Bonner and Dan Denning can. Just as anyone who looks at the facts can.

The facts are there for anyone who cares to look at them.

A sharp-eyed reader offers a correction, after Tom told the story of how he crossed the U.S.-Mexico border 15 years ago (and got arrested for it)…

Reader comment: Your stories are always amazing. I think you’ve lived ten lifetimes already, and you’re still a youngster. Your family is having fascinating adventures! I have really enjoyed reading your posts, and noticed that you referenced the Rio Grande as being on the border of Texas and Arizona. Please note that the Rio Grande flows through New Mexico, and becomes the border with Mexico starting at El Paso, Texas. The Rio Grande never really gets within a hundred miles of Arizona.

I’m not trying to be critical, but we New Mexicans are a little touchy because we are part of the United States and are often overlooked or listed as an afterthought. Stop by sometime for beautiful landscapes, vistas, fresh air and some great green chile when you are passing through!

Reader comment: THANK YOU, THANK YOU, THANK YOU for your lesson on stock market valuations. You are teaching us a financial subject that is very complicated in a very simple, easy-to-understand language. Your writing is as good as Bill Bonner’s (almost)…

Reader comment: I couldn’t agree more with you. The day will come when all forms of fake money (including the fake cryptos) will be anchored to gold, simply because it is the only true and lasting reference for valuing anything that can be owned and exchanged by people and their organizations. Gold’s value never changes, all other values go up and down against it. Keep the good work going! All good wishes.

As always, please keep writing us at [email protected]. We read every message you send in.