CORPORATE APARTMENT, BALTIMORE – I once gave a railroad worker the fright of his life in Cumberland, Maryland. He was so scared, he jumped back two feet and screamed…

Kate (my soon-to-be-wife-again) and I just spent 18 months traveling around the world, with just a small suitcase and our three kids in tow.

But now that our trip is over, it’s time to get back to work… and design a more orthodox lifestyle.

We’ve come to Baltimore to hang out with Bill Bonner and Dan Denning, to iron out the details of a new project we’re working on. You can expect to hear a lot more from me in the future…

Sun Over the Harbor

Bill is putting us up in a corporate apartment in downtown Baltimore. It’s a beautiful apartment… and each morning we see the sun rise over the harbor. Here’s what it looked like this morning… 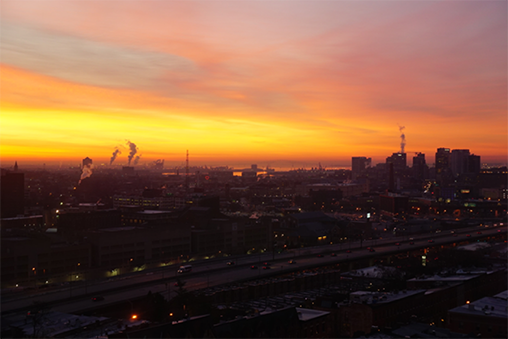 Our view of the harbor

These are exciting times for us. I haven’t mentioned this before, but Kate and I met in Baltimore – working for Bonner & Partners’ parent company, The Agora – 15 years ago.

Bill’s editorial team had hired me to be a managing editor. I’d gotten off a plane from London with the clothes on my back and a small backpack. Kate was working in customer service, on the floor below, answering the telephones. We fell in love…

So for us, Baltimore is a walk down memory lane. It’s also a beautiful city. Despite what you read about Baltimore in the papers these days, it’s a charming, unpretentious city. We love being here. And it’s wonderful being able to share it with our children.

But what about that railroad worker I mentioned earlier?

If you’ve been reading these postcards, you’ll know I have an obsession with freight trains. And when I was a younger man, all I cared about was traveling by freight train.

Baltimore is a busy railroad town. So while my colleagues were in the office busy running a publishing company, I rode my bicycle all over town studying the train tracks, the train yards, and the movements of the freight.

One night I biked into East Baltimore with a sleeping bag on my back. There was a spot where the CSX main line crossed over a street called Pulaski Highway.

I locked my bike to a fence, climbed up the embankment, and made my way down the tracks. Ahead of me, I could see the blinking red light of one of the freight trains.

I walked over to the train, found one of my favorite sausage-shaped grainers (the kind I described here), climbed onto its porch, and made myself comfortable in my sleeping bag.

Soon the train started rolling, and a few minutes later we were zipping through the Howard Street Tunnel.

Somewhere above me stood the Washington Monument, the Agora offices, the skyscrapers of downtown, and all the people having a good time in the bars and clubs. It was exhilarating.

When the tunnel ended, the train wrapped around the Baltimore Ravens stadium… on towards D.C… and into western Maryland along the Potomac River Valley.

At Cumberland, sometime after midnight, the train drew into an enormous freight yard and the engineer cut the air brakes with a loud “whoooosh.”

This was the end of the line for me. Time to find a ride home…

Stuck in a Maze

I was in the center of the biggest freight yard I’d ever been in. There were long strings of freight cars hemming me in on both sides. I was stuck in a maze.

I started climbing over them, trying to find a way out of the yard. But it was dangerous…

These strings can suddenly get shunted, and you can be thrown off or crushed in the knuckles between cars. I crossed three or four strings like this and came to a road.

There was a car coming. Yard workers in a white pickup truck. I hid. Mind you, what I was doing wasn’t exactly legal… But I got lucky. They sped past.

I kept going. But I couldn’t get out of the yard. It was dark, and there were so many rows of parked trains to climb over. And each time I found a road, yard workers would come speeding past, and I’d have to take cover.

I gave up trying to leave the yard. Found another sausage-shaped grainer. Rolled out my sleeping bag on the porch. And went to sleep…

Careening Down the Hill

I was being “humped.”

Humping is a technique the railroads use to break up a freight train and send the freight cars down different tracks. It ends with the loose cars careening down the tracks by force of gravity… until they hit the correct string of cars they need to join.

I froze, not sure what to do. Suddenly I was at the top of the hump, there was a powerful light above me, and two men were unhooking my grainer from the main train. Soon enough, my now-detached grainer would be in free fall down the hill.

I sat up. One of the men saw me, and I spooked him. He screamed and jumped and then started laughing. By that point, I was careening down the hill, holding on for dear life…

Then, “BOOOOM.” We smashed into the stationary freight cars I was being added to.

I packed up my stuff in a hurry, jumped down, and tried to escape, but it was too late. The cops had seen me.

P.S. I told the cops I was having an adventure and I wasn’t doing anything stupid. They made a note of my ID and drove me to the main road. I walked to the Amtrak station and went home on a passenger train… 100% legally this time.

P.P.S. Someone stole my bike that night.

Reader comment: Thanks for you postcards. Thoroughly enjoyable. I so admire your bravery and conviction.

Reader comment: After reading your many “postcards,” I have the impression that there is something authentic and deeply human about you as a person that, before this wonderful journey with your family, you lost somewhere during your mad pursuit of money and “success.” I think you understand this now and have regained your authentic humanity. Whatever you do from now on, I believe it will be for the good and happiness of yourself and Kate and your beautiful children.

P.S. I look forward to reading the book you’re writing about your internal and external journeys.

Reader comment: I just want to thank you again for the enjoyable and valuable lessons I have received from your posts, which I was happy to read over the past months.

Your personal observations and thoughts on the countries you and your family visited are informative.

Your ideas and suggestions on smart investing, especially on gold as a safety asset against a probable stock market collapse, are mind-awakening. I’m taking them to heart.

Reader question: I moved much of my cash from euros into Aussie dollars in 2009 and made about 20% in under 22 months. The Aussie dollar has had a very rough time against the euro over the past three to four years. Do you see a reversal anytime soon? I have put a nice portion of my liquid assets into gold over the past two years.

Tom’s response: Sorry to say I don’t have a strong view on the AUD/EUR exchange rate. But if anything comes to me, I’ll write about it in one of these postcards…

Please keep writing us at [email protected]! Your messages are an integral part of these postcards, and we read every note you send in.