It probably wasn’t the most sensible decision, but there were protests happening outside our hotel. I was curious to see what was going on. So I went to check it out…

While I was watching, a canister exploded next to me. The smoke went in my mouth and in my eyes…

On the Ground in Hong Kong

Greetings from Hong Kong! My family and I have just arrived from China. We will spend 10 days here seeing the tourist sites and meeting some of the locals. Then we go to Japan.

The first thing to report is how expensive it is here. We’re paying $50 for a simple meal, $5 for a coffee, and $50 a night to stay in a tiny, windowless box in the center of a violent uprising.

Prices are about triple what they are in China.

Here we are in our tiny hotel room… 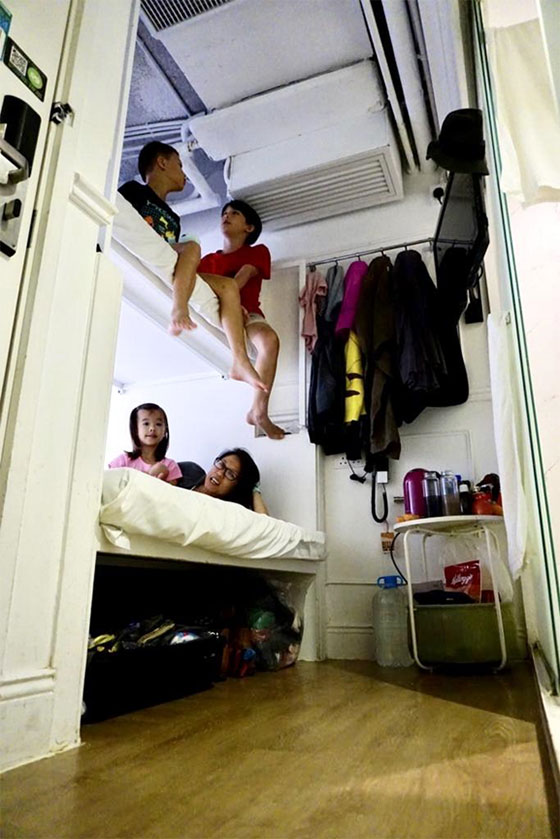 Kate and the kids in our overpriced, windowless
Hong Kong hotel room

Also, it seems to me that the Hong Kong dollar is a great “short.” (A short is a bet on something falling in price.)

I understand Hong Kong is a global financial center and a dynamic place… but it feels overvalued to me… like Britain was in 2007… or Brazil was in 2011. It should be cheaper, like its neighbors China, the Philippines, Taiwan, and Vietnam.

This feels like the classic “vulnerable peg” situation. Currency speculators love these. Capital flees out of the pegged currency… pressure increases on the peg… speculators bet… more capital flees… It becomes a self-reinforcing dynamic.

For the last five months, hundreds of thousands of protesters have taken to the streets every weekend to protest Beijing’s increasing intrusion into Hong Kong’s affairs. Recently, the protests have turned violent.

Things seem to be escalating. It’s almost like the protesters are goading Beijing to get involved…

Big Risks… and a Classic “Tell”

According to government statistics out two weeks ago, Hong Kong’s economy is now officially in recession.

The protests, Hong Kong’s economic crash, and an extremely inflated property market mean big risks to the Hong Kong dollar’s value. Interest rates should be rising to compensate for this risk… but they aren’t.

If I had my savings in Hong Kong, I’d be turning them into U.S. dollars right now. I’m sure the locals are doing this. It must be putting pressure on the peg… and attracting speculators…

Local media says the currency board is running short of ammunition to defend the peg.

In other words, it’s just a matter of “when,” not “if,” the Hong Kong dollar crashes from its peg.

Oh… and before the peg breaks, look out for the classic tell you always see in these situations. A government official will announce, “We will not abandon the peg,” or something similar. That’s when you know they’re about to abandon it…

Caught Up in the Chaos

Normally, they protest on weekends. Not sure why they were protesting on a Monday…

There was a protest near our hotel, in Causeway Bay, so I walked over to have a look.

The police were standing in the street in formation, kicking the bricks out of the street and making sure the buses got through. The protesters were nearby yelling and chanting. 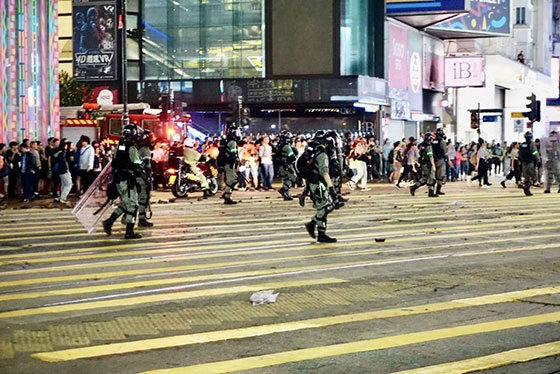 Hundreds of people lined up to protest in Causeway Bay last night,
close to our hotel. Then things got violent…

I was standing in the crowd. We were watching. Then suddenly, a gas canister exploded a few feet away. Someone screamed. Everyone started running. Then another one exploded in front of me…

I couldn’t believe this was happening. The smoke burned my eyes and throat. I wasn’t sure which way to run. I just put my head down and kept going…

P.S. We’re staying in one of the busiest areas of Hong Kong. Normally, people would be packing the sidewalks, eating at the restaurants, and shopping in the giant malls, which typically stay open until midnight. But tonight, everything’s closed and the streets are empty.

Things are not looking good for Hong Kong’s economy. 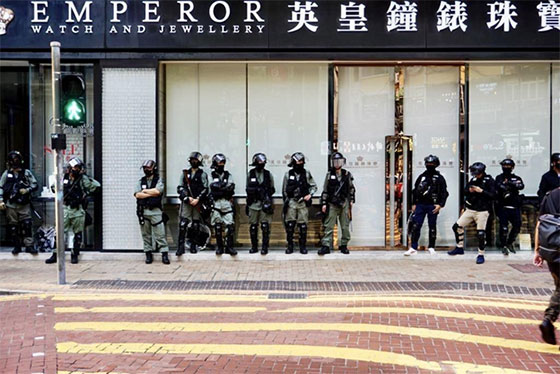 Bad sign for Hong Kong’s economy: Police, not shoppers,
line storefronts in one of the busiest areas of the city

First up, not everyone sees eye to eye with Tom’s homeschooling methods…

Reader comment: Education traveling in China? Please give me a break. No place on earth is as dirty/primitive as China. To take one’s children there is truly insane. Resided there for eight years – never again to even visit.

Reader question: In your extensive travels through China’s remote cities, do you experience a significant language barrier? If so, how do you deal with it, assuming you and your wife do not speak Chinese?

Tom’s response: We met only a handful of people who spoke English. For everyone else, we used Google Translate and lots of gesticulating.

Reader question: How do you book or learn of ahead where to stay overnight?

Tom’s response: We mainly use smartphone apps like Airbnb, Agoda, Booking.com, and Hostelworld. They work great. In 18 months, we haven’t had a bad experience, although I’m worried about our next hotel here in Hong Kong. It looks a little seedy…

Reader question: Is your laptop computer of much use to you in China (having no Google)?

Tom’s response: I don’t have a laptop. I write and send these postcards with an old iPhone. We could use our phones in China, but it was a big hassle. (I wrote more about that here.) We’re all so happy to be in Hong Kong and have the internet back…

Reader comment: I congratulate you and Kate for doing this trip! We have always had 20% of our net worth in gold and silver. I understand your premise about the Dow-to-Gold ratio. I’m just having a hard time letting go of my other investing ideas.

Reader question: During the 2008 crisis, gold, silver, and the miners all took big hits as people sold in order to cover margin calls. Do you expect this to happen again during the next crisis? I hear no one talking about this today as so many recommend buying the miners and metals.

I love your writings and look forward to them each day.

Tom’s response: First of all, I don’t expect the next crisis to resemble the previous crisis. They never do. I suppose it’s possible gold and gold mining stocks go through a large correction if liquidity dries up…

But these days, I look at gold and silver only in terms of the Dow. If there was a liquidity crunch, I’d expect the Dow to fall more than gold.

Reader question: I really enjoy reading about your adventures. As someone else said, I wish I had seen your postcards sooner. Do you have any archives from earlier that we can read?

Tom’s response: You can see the archives here. And as always, please keep writing us at [email protected]. Kate and I read every question and comment you send in, and we’ll always do our best to answer it.