LONDON, ENGLAND – Picture yourself high up in the Mexican Sierra, some of the most pristine wilderness the world has to offer. Cold brisk air tumbles effortlessly down the faces of countless, nameless rocky peaks.

You’re clinging to the roof of a hotshot grain train, speeding in and out of tunnels, around tight mountainside curves and across gorges. The sun warms the air, and for the first time that day, you notice the sweet smell of pine… 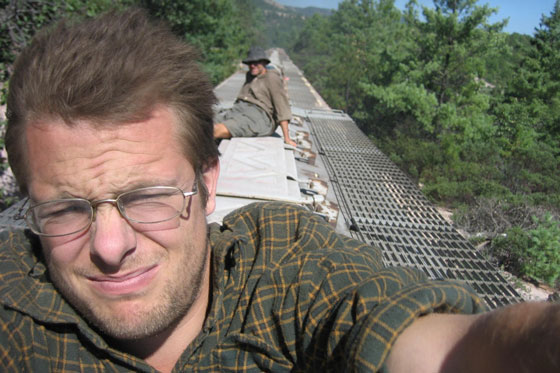 My family and I are hunkered down at my mother’s house here, resting, and mentally preparing to begin the next chapter in our lives. Not much to report here, so I’ll continue telling hobo stories…

Yesterday, I wrote about my trip through the Copper Canyon on a Mexican freight train called La Bestia with a group of migrants from Honduras. There weren’t any decent rides so we’d been forced to choose between two bad options:

A sausage-shaped grain car at the front of the train with an excellent porch for sleeping on, but that was right behind the locomotives and we’d get asphyxiated by the smoke in every tunnel. There were 88 tunnels.

A box-shaped grain car further back up the train. This grain car had no platform, so we’d have to spend the night balancing on a thin metal bar (the “cheese slicer”) over four spinning steel wheels.

Our Honduran buddies chose the cheese slicer. My American friend and I went for the exhaust pipe… except we didn’t find out just what we were signing up for until it was too late.

The next morning, high up in the Mexican Sierra, alive, covered in soot, and with croaky voices, we pulled into a small town. They split the diesel engines from the train to refuel.

Rigo, the pack leader, suggested we sit on the roof. “Keep your eyes forward and watch for branches,” he said.

The Hondurans left us and ambled toward the rear of the train.

The sky was cloudless and perfect. You only ever find weather like this in the mountains. It makes everything look so clear, as if the lens in your eye has been upgraded. 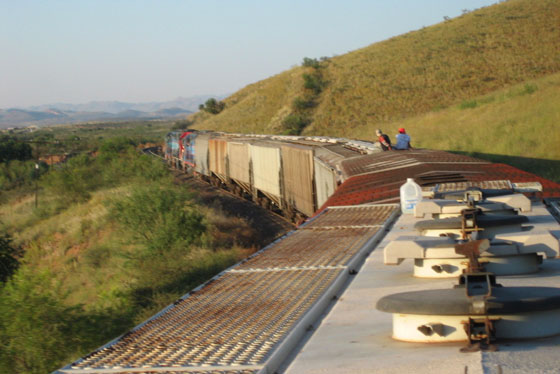 Perfect skies over the Sierra

And I don’t have to tell you how sweet the mountain air tasted after sleeping in the smoke.

On Top of the World

There is a ladder at the end of every freight car. The workers use them for opening hatches on the roofs. We climbed onto the roof of our grain car and waited for the locomotives to come back.

The next six hours were quite possibly the most exhilarating of my life. 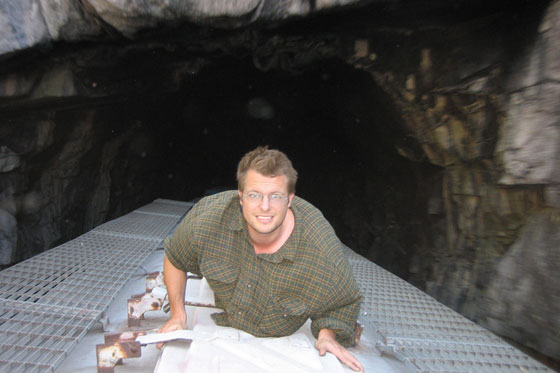 Where I spent the six most exhilarating hours of my life

The track was all downhill and we bombed it. We could see Rigo, his brother, Menor, and half a dozen other illegals further back. They waved.

One girl – she was a teenager – came to visit us. She ran along the top of the train, jumping from car to car.

It swayed and jerked as a 50-mph freight train does. Several times she had to check herself and regain her balance. I thought she was going to die. She shook my hand, told me her name, and then ran all the way back!

Later that afternoon, we joined the rest of the migrants. I was pumped. Everybody was. One guy – he’d been kicked out of the USA 15 times – was dancing on top of the train, on top of the world, waving at the motorists, yelling, and whistling in the wind. 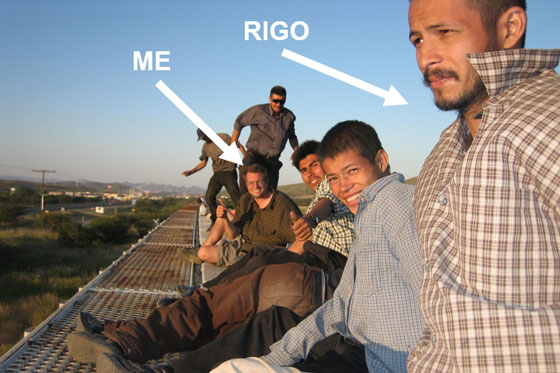 We felt like we were on top of the world

Was it the beautiful sunset that made him feel so joyful or was it the ride on top of the train? Maybe it was the U.S. border. We were close now.

We ditched the train as it crawled into the freight yard in Chihuahua. I didn’t want to interfere with the Hondurans’ plan to cross the border. We would draw attention to them. So we split from the pack.

We took Rigo’s address and said goodbye. I heard from Rigo a few weeks later. They made it across the border and back to Colorado.

My friend and I didn’t. We got busted wading across the Rio Grande by the border patrol the next day…

Reader comment: I have been a big fan of your column from the beginning. Now that your trip has concluded, I have an idea that I think other readers would find interesting: I’d like to see you devote a week of your column to having Kate and each of your kids write their own column giving their personal impressions of the great adventure and their thoughts of the future, followed on the last day of that week by your reactions to what they wrote.

We’ve heard so much about your family unit for many months, and I think this would give an added dimension to the relationship between you all and the readers and also to your writing as you continue the column.

Wishing all of you all the best on your continuing journeys!

Reader comment: I have been reading your newsletter Postcards from the Fringe every day since it was published. After reading the “Who Says We Have to Rejoin the Matrix?” issue, I would like to write something to you.

I’m taking the spiritual path and, like you, I finance my way from the stock market. I have been doing this for many years. What I want to tell you both is that the Matrix is not only on the outside, but above all it is within us. We cannot really find a satisfying solution to escape from the Matrix in the long run, if we are unaware of this fact.

For example, if you plan to travel all the time. It will not free you in the long run. In the long run, you will need another solution. But if we know that the Matrix is within us, we can find new ways out, which were unknown before. We don’t even come up with the idea for these new ways if we don’t look inside.

I think it would help you if you would move a little in this direction. Depression always has something to do with suppression. Suppression often happens unconsciously through our patterns and conditioning. The Matrix is within us. I would like to recommend a very interesting film to you, which is legally available for free on YouTube. It is called: Samadhi: Maya, the Illusion of the Self.

When you watch this film, you see what is meant by the inner dimension of the Matrix, which holds us captive and which we can never escape from unless we dissolve it where it arises – in us. Invest, if you like, the one hour for the film; it’s worth it.

Tom’s comment: Thanks for the suggestions! Kate and I read every note you send us – even if we don’t publish an answer right away. Please keep writing us at [email protected].