SWAN KAFFE, FUKUOKA, JAPAN – I didn’t kill myself. But I thought about it a lot.

I got the shakes, too. And insomnia. And I lost my business and my job.

I also lost a lot of weight. And people told me I seemed distant when they tried to talk to me. At one point, my friends were so worried about me, they frogmarched me to a shrink’s office. (The shrink gave me more pills.)

I’d tried everything. I was still in agony. And I couldn’t see a way out. I was beginning to lose hope…

I’m writing to you from a little coffee shop today in the town of Fukuoka, Japan.

Kate and the kids have gone into an interactive children’s museum nearby. They’ll spend the next few hours there, so I thought I’d find a little coffee shop, order a cup of hot coffee, and write you a letter.

The coffee shop is called Swan Kaffe. I’m the only customer. I’ve even found the perfect desk for writing a letter. 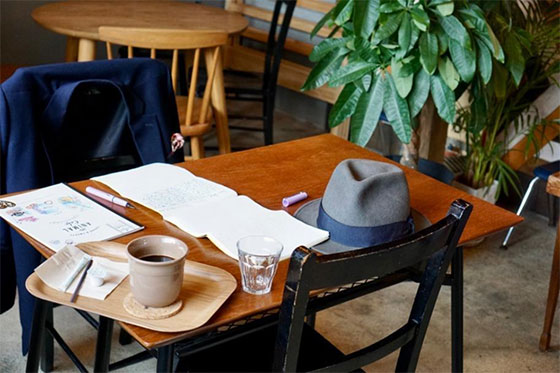 I found the perfect writing desk at the Swan Kaffe, while Kate and the
kids visit a museum

It was almost two years ago today.

Kate approached me and suggested I leave Delray Beach and go straighten out my head. She said she’d look after the kids for me.

In retrospect, that offer was one of the greatest gifts I’ve ever received – it’s not hyperbole to say it saved my life. I just couldn’t get out from under the rock in Delray Beach.

So off I went… to Scotland.

Kate, meanwhile, was doing great. Since we’d gotten divorced, we hadn’t seen each other much – only on the kid-handover days every other weekend – and we weren’t friends. We rarely spoke.

Some divorced couples stay friends and celebrate their kids’ birthday parties and Christmases together. We didn’t.

But it wasn’t a bitter or acrimonious divorce. We just drew a line through our marriage and went our separate ways. She met a new man. They had a solid relationship. And the kids loved him.

So I went to Scotland and hiked up some mountains, and got blown around in some gales for a few weeks. Then, I went to South Africa and found a place on the beach, and went surfing for a few more weeks.

Here I am in Scotland… 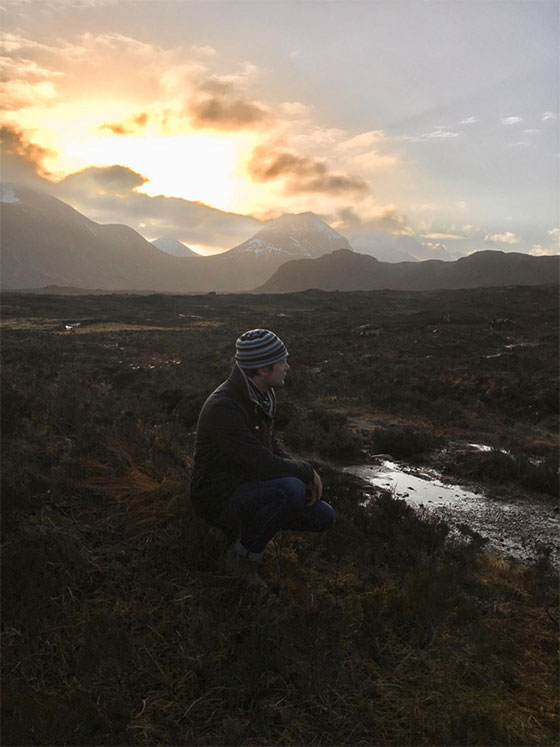 Two years ago, Kate suggested I leave Florida to straighten out my
head. Scotland was my first stop

It was while I was in South Africa that Kate brought up the idea of a road trip. She was thinking about hiring a camper, she said, and taking the kids on a trip by herself to see national parks.

“I should probably learn how to handle a gun for self-defense while we’re on the road,” she added.

So I said, “Maybe I can come with you? I’ll come back to Florida. I’ll be your driver and navigator and tour guide and bodyguard and luggage porter, all at the same time.”

She thought about it for a few days. Then she wrote a text to me that just said, “Okay.”

So I rented a van online, ordered a tent and some other supplies from Amazon, and flew back to Florida. A few days later, we all went to Miami to pick up the van, and off we went. We now had 35 days to drive around America together…

(It was the first time I’d been in a car with Kate and the kids in four years.)

Here we are on the first day, with our graffiti-covered van… 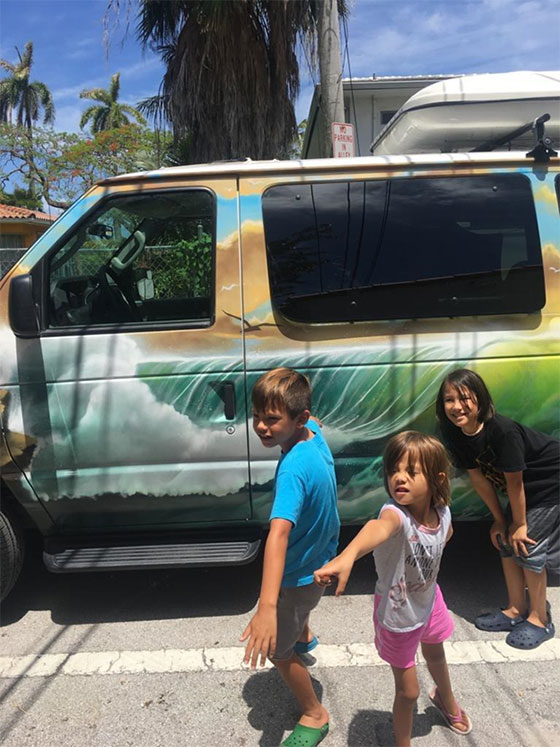 The kids in Miami, picking up the van we rented for the road trip that
brought us back together

Well, what else can I say? That road trip around America was awesome. We camped out for 35 nights in a row.

We visited five or six national parks, including Grand Canyon, Zion, Yosemite, and Bryce. We camped among Redwoods.

We felt the heat of Death Valley. We swam in the Colorado River, and we gazed at the stars over New Mexico.

We made campfires and told stories and played cards and roasted vegetables. We watched freight trains beating their way across Texas. We watched the Blue Man Group in Las Vegas. We crossed the Golden Gate Bridge and bodysurfed in the Pacific Ocean. We saw bears and rattlesnakes and elk…

It was a perfect trip. Just absolutely perfect. Kate and I had long conversations about love and divorce and kids…

P.S. If you’re wondering what Kate’s boyfriend thought about her going on a road trip with me, join the club. I was wondering the same thing. It was none of my business, though, and I didn’t push Kate to talk about it.

Later, Kate told me he was very supportive and didn’t want to obstruct her happiness, even if it meant letting her go camping with her ex-husband.

“Besides, there is zero chance we’ll ever get back together again,” she told him…

Readers turn to the collapse of our money system… divorce, and what it means for the kids… and the honesty of the people who helped Tom get his lost camera back in Japan…

Reader question: Question for Tom. Ten years is a long time to give this bogus monetary system and the rise of the gold price. Can you cut that back?

Tom’s response: It could fall apart much sooner. I just say 10 years to manage my expectations and foster patience. You know?

Reader comment: I am completely amazed that you got your camera back.

I live in a very small town in Pennsylvania, and while at the post office, I received a package from IBM (I worked for them), and I laid the package down as I retrieved mail from my P.O. Box at the other end of the small room. Within seconds, the IBM package was gone, and a pickup truck outside squealed away.

The package contained only a binder that had an explanation of the company’s latest health plan benefits in it. Guess the thief thought it might be a computer.

Tom’s response: I would have been amazed if I had NOT gotten the camera back. You’d see what I mean if you ever come to Japan. You’ll feel so secure, and you’ll have complete trust in the people around you.

It’s the only place in the world we’ve felt comfortable letting our kids run around outside by themselves, for example.

Reader question: So, do you buy your gold in ounce coins, or smaller fractions of, or bars of bullion, or do you just have some paperwork from a company showing you own some gold? I thought the small coins would come in handy for bartering some day.

I’d appreciate any suggestions. Thanks, and have fun!

Tom’s response: I bought one-ounce coins, as they were the best deal in terms of metal per dollar. I also own some junk silver coins. But I’m not expecting to have to barter with gold. If anything, I think the next 10 years will feel more like the late 1970s.

Reader comment: Thank you for sharing your family’s adventures with your readers. I also appreciate your explaining the real economic picture.

Getting away from the noise of modern life makes things crystal clear. I think that the true luxury of life is having peace and quiet to reflect.

I miss the pre-internet days, when we wrote letters and made phone calls to communicate. Texting can be helpful when talking is not advisable, but it is certainly overused.

I’m happy to learn that an honest person turned in your camera.

Reader comment: I have been following your writings and work for quite some time. You fell off the grid, and I’m glad to now read your latest postcards and financial thoughts.

My wife and I (and now the extended family – three kids, five grandkids) live on the fringe. We both left full-time work at 50. With the education and knowledge gained from some of your and others’ teachings, we travel the world and do lots of “fishing.”

Returning to our fringe now after some southern travels. It will be mainly dark there now (close to winter solstice), but when the spring solstice arrives, you know why you’re there. Safe travels.

He’s made a lot of money betting that interest rates will just keep going down. And while I don’t recall his argument in detail (it got pretty deep), what you write seems reminiscent of Dr. Hunt’s argument about why the U.S. economy has basically held up over the last several decades, despite the incredible amounts of debt that have been piled on.

Are his views consonant with yours?

Tom’s response: Does he think the Federal Reserve’s going to print trillions of dollars, gold’s going to rise, and paper currencies are going to fall, and it’s going to lead to a complete redesign of the global financial system? If so, then yes.

Reader comment: My wife of 25 years and I divorced, and we remarried 18 months later. You were attracted to your spouse for many reasons originally, and then life gets in the way. Work stress, kid management, finances, selfishness, and inflexibility all worm their way into relationships.

I am pleased you are remarrying. You have many reasons to make it work and children who are dependent upon you two for stability and love. When you split, they often subliminally assume it was their fault.

Make it work, and work at making it. Communication is paramount. Your feelings are important, but know this: You will be challenged. Commit to work through problems; agree to give in and lose battles. It has to be 50-50. God bless you both.

Tom’s response: Thank you for the kind messages. Kate and I find your notes very encouraging. Please keep writing us at [email protected].