LONDON, ENGLAND – When we were in Chengdu, China, a backpacker from Ireland asked me what I thought of bitcoin…

“It’s not a popular view,” I warned him. “But I’ve been following bitcoin since 2012. So I have some history with it. I love the concept, but in my experience, when something goes through a speculative bubble like bitcoin did in 2017, it needs a long cooling-off period before it’ll rise again.”

There was a speculative mania in the stock market in 1998 and 1999, driven by internet and technology stocks. It broke in March 2000, and 20 years later, stocks are still going through the “cooling-off” process.

As I told Gabriel (the Irish backpacker) with bitcoin, stocks won’t be a good investment again until everyone’s lost interest in them.

“But the stock market has been making all-time highs,” you might say.

No, it hasn’t. Not when you look at it from the perspective of gold, which is the correct perspective to use if you really want to know how well something’s doing.

From the perspective of gold, the Dow Jones index is down 53% since the mania broke in 2000. 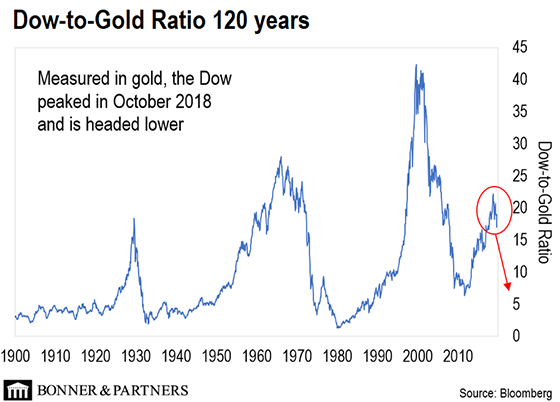 By the time everyone’s “lost interest” in stocks, the Dow should be down about 90% from its 1999 high in gold terms, or at a Dow-to-Gold ratio below 5.

This is why I won’t buy stocks today. I’m waiting for them to reach the point of “investor indifference.” In the meantime, we wait on the sidelines in gold.

P.S. There’s another – very personal – reason why I won’t buy bitcoin. I like to make huge all-or-nothing bets on things I have absolute and total conviction in.

I had absolute conviction in bitcoin at $4 in 2012. But with bitcoin around $8,000 and everyone still talking about it, I don’t have the conviction levels I need to make a big investment. I’d be terrified I was buying at the top, and I’d probably panic-sell my stake at the first sign of weakness.

On the other hand, I have so much conviction in my Dow-to-Gold bet, I’ve put every spare cent I could find into it. And I won’t flinch until the Dow-to-Gold ratio hits 5, no matter how scary the ups and downs are.

Kind words from readers about Tom and Kate’s future re-marriage… and about Tom’s news that he plans to write a book, now that he’s on a “digital detox”…

Reader comment: Still enjoying your postcards! I was in London a few years ago. I visited St. Paul’s Cathedral, where I happened to start a conversation with a Londoner about WW2.

He told me the story of how Disney’s Dumbo was playing in the theaters at that time. Being a child then, he was constantly begging his mom to take him to see the movie. She finally caved and took him to see the movie. When they returned to their neighborhood, they found that their home had been reduced to rubble by a German V-2.

Have fun in London, and good luck when you return to the States.

Reader comment: I’ve been a pastor for 41 years and five months. Just retired 10 days ago. I have seen so many marriages fail inside the church, let alone outside.

Do you know what is the cause of probably 80% of the crime, drug abuse, and general misery in our country today? It’s the breakdown of everyday, intact, loving families that give children a chance to grow, learn, mature, and become productive, reasonably happy people as adults. Not “super-duper” families… just normal people living normal lives, together.

Tom and Kate… write the book, please. You’ll make a good bit of money in the process, but more importantly, you will save marriages; increase intact, loving families; and literally save the lives of many, many innocent children.

Reader comment: Thank you for sharing your many fascinating adventurous experiences and travels with your readers, along with giving great, sound financial advice! We certainly appreciate you for your honesty and for sharing your gift of writing by way of these blogs.

Being married for 55 years, we love hearing about happy endings, as with your family uniting again and giving hope to others in this stressed-out world. We can always choose an alternative lifestyle, as scary as it may be!

Your notes are an integral part of these postcards. As always, please keep writing us at [email protected].