We learned about “black rain.” For several days after the blast, a hot, oily rain fell on Hiroshima. It left black streaks on white walls. It was radioactive. Anyone who touched it got radiation poisoning.

We learned about the dead body with its hands in the air and its fingers still burning several hours after the blast. This detail came from one of the survival stories.

The fingers were burning with brilliant blue flames. A gray liquid was running down the arms. There’s a painting of these hands in the museum.

We learned about the A-Bomb Dome. The A-Bomb Dome was a popular assembly hall with a green dome on the roof. It sat almost directly underneath the bomb when it exploded. (The bomb detonated 1,900 feet above Hiroshima.)

By a fluke of physics, the A-Bomb Dome was the only structure that remained standing inside the blast area. It marks what they call the “hypocenter” of the bombing. They’ve preserved it.

We learned about the siblings Aiko (9) and Toru (7). They weren’t injured by the explosion. But they went outside in the black rain. Four days later, their hair began falling out.

They were teased at school and ostracized by the other kids. (People thought radiation poisoning was contagious.) Then, they had to live with the likelihood they were going to die.

There were many stories like this in Hiroshima. The memorial says 140,000 people died from the explosion and another 60,000 died from cancer and radiation poisoning in the years that followed.

This is the A-Bomb Dome… 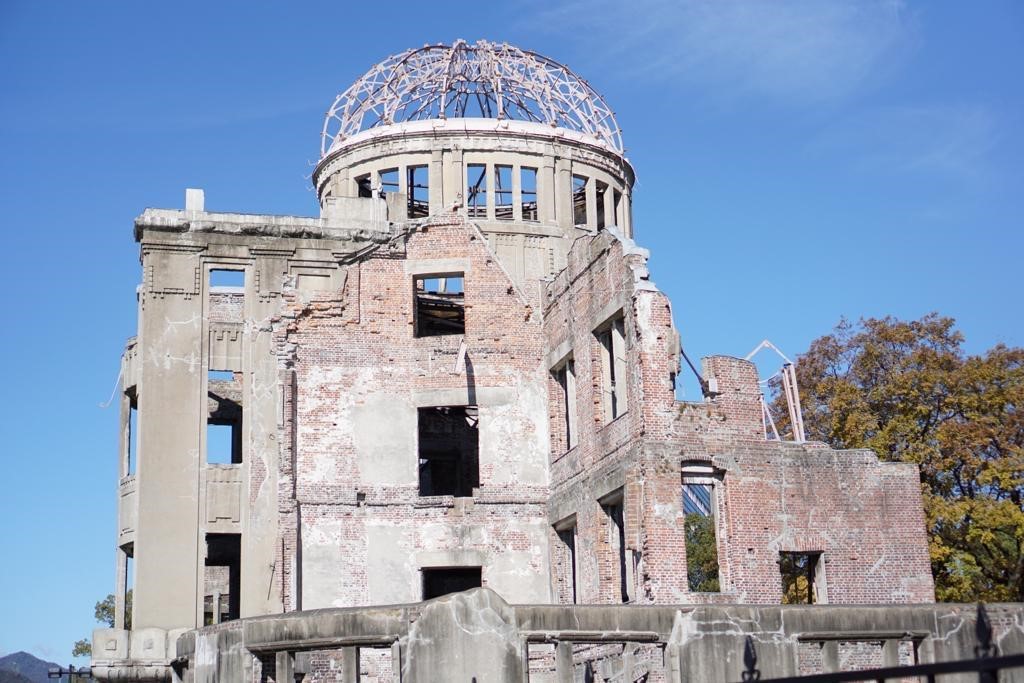 The A-Bomb Dome, an assembly hall that sat right under the bomb
when it went off, but somehow remained standing

One More Reason We Love Japan

My family and I have been traveling around Japan by train for the last two weeks, staying in Airbnbs and cheap hostels. We have Japan Rail passes, so we can take any train we want, including the bullet trains, which run at 200 mph.

Japan isn’t that large, so from Tokyo you can pretty much get anywhere in less than a day using the bullet train. So far, we’ve been to Tokyo, Osaka, Kyoto, Fukuoka, and Hiroshima…

We love Japan. I’ve already mentioned the food and the good manners.

Something else we love about Japan is the attention to detail the designers and engineers put into everything. From the cleanliness in the public lavatories to the way the trains run.

For example, I didn’t realize you could improve a standard American bathroom that much. But Japanese engineers figured out how to improve the bathtub drain, the shower faucet, and the light switches.

Everyone has heard about the toilets in Japan. In the Airbnb we’re staying at tonight, ours looks like a rice cooker, it has so many buttons. 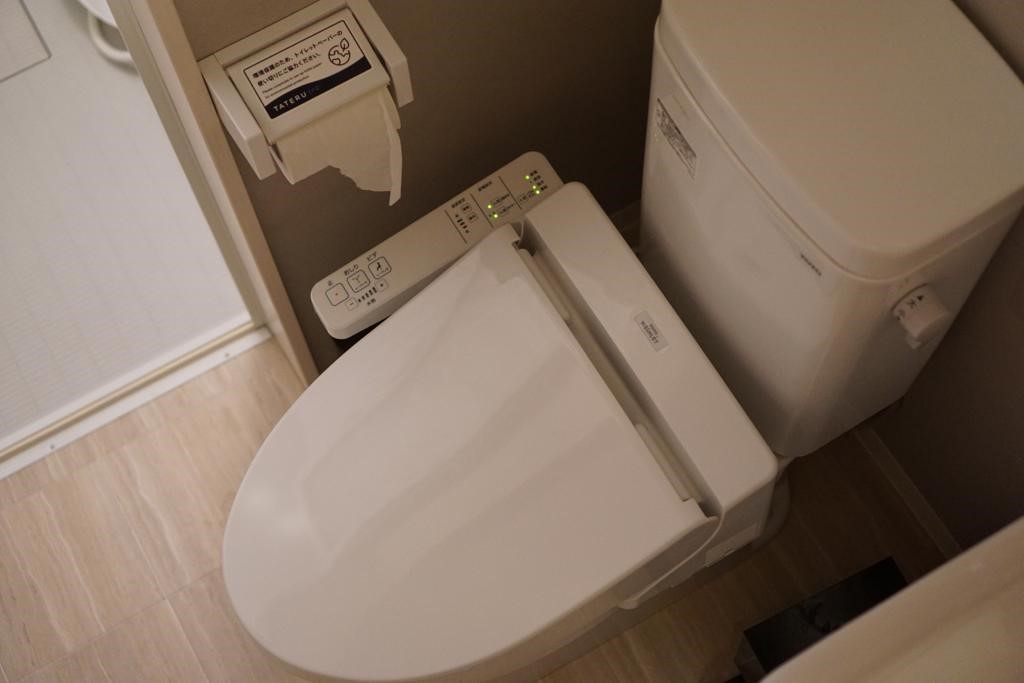 The toilet in our Airbnb has so many buttons, it looks like a rice cooker

Over the last 18 months, we’ve seen many “dark” tourist sites.

We spent two months in Rwanda. We visited several genocide memorials, including Murambi, where they preserved hundreds of the corpses of the victims in lime and displayed them on tables. (We left the kids outside for that one.) 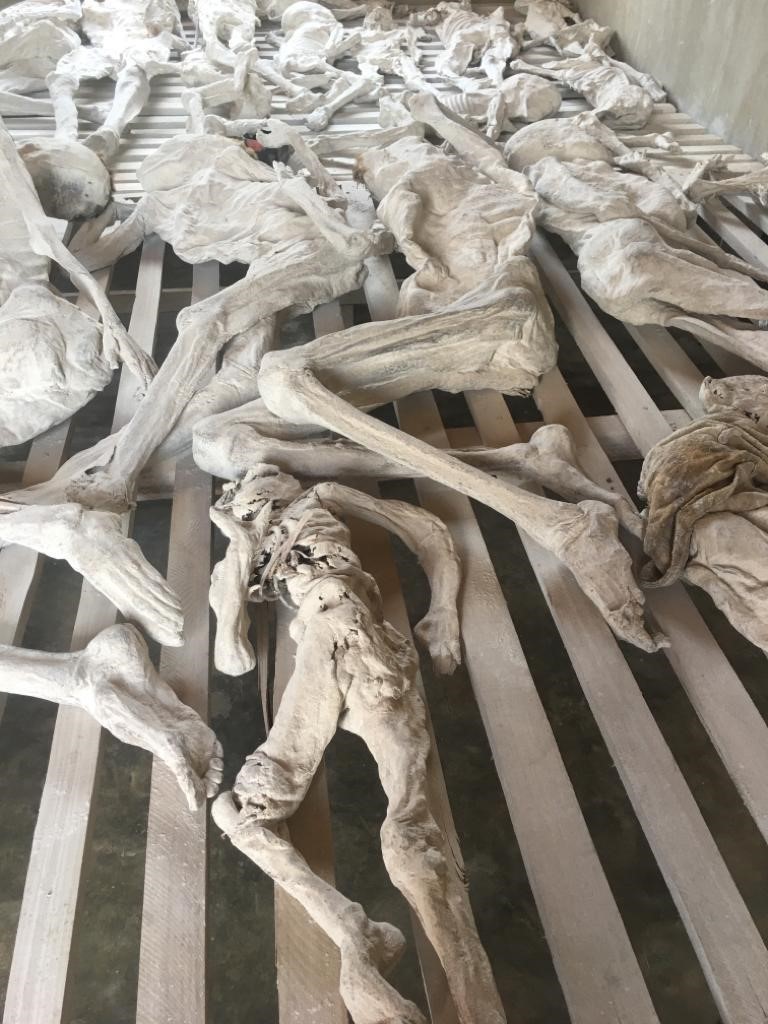 In Murambi, Rwanda, they preserved hundreds of corpses of genocide
victims and displayed them on tables

We toured Eastern Europe. We visited the sites of two Nazi death camps.

We visited Vietnam. We toured Hoa Lo prison – the Hanoi Hilton – where the Viet Cong held John McCain and other American POWs.

I’m glad the children get to see these exhibitions. This trip is a field trip, not a vacation, and we feel this is a part of their education.

We always prepare them for what they’re about to see. We make sure exhibits are age-appropriate. I think we’ve done a good job of this.

This is the Memorial Museum… 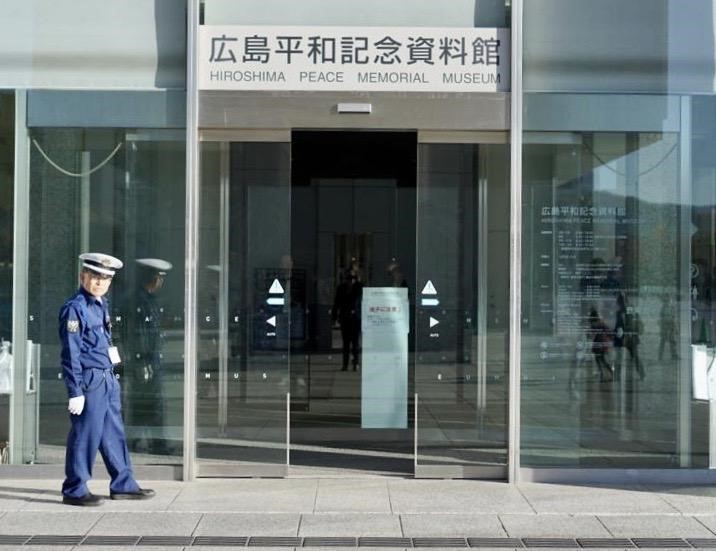 We took the kids to the Hiroshima Peace Memorial Museum, which has
been running since 1955

Later this week, we’ll go to Nagasaki. The bomb that fell on Nagasaki was 30% larger than the Hiroshima bomb, but it was less devastating because it didn’t hit its target, and some mountains blocked part of the explosion.

P.S. I left my camera on the bullet train this evening. It’s probably halfway to Kagoshima (at the end of the line) by now. Hopefully somebody will turn it in…

Reader comment: I just wanted to tell you how much I admire you. This journey with your family has altered my perspective on life, and it’s gotten me to reevaluate many aspects of how I live.

Your latest thought experiment – unplugging and living like we did before the tech revolution – is perhaps the most fascinating of all. I’ve come to loathe the impact of social media and “constant connection.” Now I can’t wait to hear what you come up with.

Reader comment: For a while, I stopped carrying my phone with me during the day. It was liberating. Hard to do when you’re traveling. But if you’re sedentary, ditch it. I also only check email in the morning and at night. Not realistic with some jobs. But screen time will consume all your free time if you let it (email, Twitter, Netflix, YouTube).

Anyway, I’ve wondered about “dropping out,” too. Trying to live without a smartphone and the internet, or in a highly rationed way. It’s not that hard. You just have to decide to do it. Might make an interesting book, too, like those people who quit drinking or eating sugar. A before-and-after thing.

Reader comment: Just a quick note to say I love this new e-letter… and I’m 100% with you on giving up technology (in particular, my smartphone)…

Reader question: Have you been to Nicaragua? It’s cheap and safe, as long as you stay away from anti-Ortega politics. Much like China in that way, I’d imagine.

Tom’s response: Yes, I love Nicaragua. It’s high up on the list of potentials. I imagine it would be a very wholesome and healthy place to raise a family. Good food, good weather, nice beaches…

Reader comment: I would love to go to Iran, too. But you know, your story is perfect cover for a spy. Not that a spy would be traveling with his wife and children. But the Iranian government, to the extent it notices or cares about individual people, might react unpredictably.

Reader question: I’m continuing to read and fully enjoy your postcards. Quite revealing and rich in expression of the cultures, and deep love within you and your family. Thank you!

Question: When you sold cryptos to purchase gold, did you have to pay the government a penalty, or was it a straight exchange? Thank you, and happy travels!

Reader comment: Hey, Tom – I really enjoy your Postcards From the Fringe. About giving up technology, you comment, “How do I break the habit? It doesn’t seem possible.”

I would strongly recommend Digital Minimalism by Cal Newport. It is a deep-dive look at that question and how we might answer it in a way that does not also abandon the value of the tools. His previous works Deep Work and So Good They Can’t Ignore You are also very good – with the caveat that you strike me (at least through your writing) as someone who already understands a great deal of the material they cover. Looking forward to your next email.

Reader comment: As a coffee drinker, I was excited to see you were having fresh-brewed! I was so amazed by the American wrestler and all he had to overcome. What a serendipitous moment for you and your family to have met him and his partner.

Reader comment: Hope you enjoy Japan. The people sound much better than some of those you had to deal with in China. My heritage is French, and I was very disappointed with the rudeness I experienced in France when I visited. Some folks were very nice and asked to practice their English with me, but then there were many other times when there was a total lack of respect for personal space and privacy. Thanks for your daily postcards. Enjoy your trip!

Reader comment: Buy five acres of land deep in the country. Homeschool your children. Grow an organic crop. Sell to restaurants/private people. You can live-work and get to know down-to-earth-people – think about it…

Tom’s response: We had this exact idea in mind. We call it the Chinese takeaway model. Some sort of business my whole family can work together on… maybe an Airbnb business… or an online company or some sort… I’m not sure. But it would solve several problems at once. The kids would have a career path. We’d have an income. And our family wouldn’t be torn apart by having jobs.

Reader comment: That little computer is what the surveillance *apparatus* in 1984 was. It’s how the government watches everything you do. We’ve been fooled into being surveilled by being told the apps are conveniences. We’ve swallowed it hook, line, and sinker. We’re too stupid to see that.

Tom’s response: I’m done with smartphones. I wonder if future generations will look upon smartphones as we look upon smoking now – once considered healthy, then proven to make us sick.

Reader question: I’ve loved your postcards from the beginning. It’s a grand adventure for sure! The one question I think again and again is what do you pack or (more importantly) not pack to keep the whole family in one suitcase? Like three sets of clothes and do laundry in sinks? One coat, one pair of shoes?

We have three little boys, and it seems like we can’t go for a weekend with fewer than four suitcases. The minimal packing is an impressive part of the trip, but the family time and getting back with Kate is the best part of your story. Thanks for sharing!

Tom’s response: Haha. Thanks. Yes, we have two sets of laundry. Kate does laundry in sinks. We each have one pair of shoes. Some electronics. Some toiletries. Some first-aid stuff. Some homeschool stuff. And that’s about it.

Reader comment: Thanks for being open about Hong Kong, and not trying to be a temp on-site reporter! My intuitive senses told me that upon the exit of the Brits from HK, the officials would be incrementally supplanted by minions of the state, which does quite appear to be the case!

Reader comment: I traveled quite a bit in China, Hong Kong, Japan, and Thailand during my years in business (retired now), and totally agree with your description about the differences between Japan and China. I loved Japan, but I suppose some might prefer China and find Japan’s orderliness and politeness to be boring. Not me!

So sorry to see what’s happening in Hong Kong. Having a drink overlooking the harbor at night is one of life’s true pleasures. Or taking the Star Ferry between Kowloon and Hong Kong – something I’ll always remember with a smile. Your idea of going back to the ’80s and leaving tech behind sounds like a great idea for a book. If you could actually live your life that way, many people would probably like to try it, and you’d be on the bestseller list. Go for it! Enjoy the rest of your adventure.

Reader comment: I’m with you on wanting to live like in the ’80s, and I think I have done it. Rarely use those smartphones, for instance… only when I must. Have to show the tech who is boss!

Tom’s response: Thanks for all the kind comments and suggestions. Please keep writing us at [email protected]. Your messages are an integral part of these postcards.