Two weeks ago, we noticed the New York Fed had quietly uploaded a paper on its website about this. They titled the paper “Managing the Treasury Yield Curve in the 1940s.”

To me, this hinted that the Fed had been discussing this idea in private… and wanted to gauge how people might react, without having to say anything publicly. A sort of trial balloon.

Then, last week during a speech at a conference, a Fed governor said the Fed should adopt curve control. This confirmed our suspicions that they’ve been discussing this in private. More below.

Until the Money Runs Out

We left Baltimore last night by car. We’re on the road again. And so, Act Two of the Endless Vacation begins…

In Act One, we had a goal: to travel around the world. So we stuck to an itinerary. This time we’re going to travel “à la carte” and go wherever we want. Our first stop will be Nicaragua.

I don’t know for how long we’ll be traveling. I guess until we get tired or the money runs out.

We’ve just driven all night. Kate and I took turns at the wheel while the kids slept in the back seat. We’re heading for Fort Lauderdale airport.

Getting back to our suspicions about the Fed…

The government is broke. The only way it can meet its obligations is by paying its creditors with a massively watered-down dollar.

If we’re right about this, the Fed will have to cap interest rates along the entire yield curve. It’ll do this to prevent interest rates from rising when it starts printing the $5 trillion or $10 trillion it must print over the next few years to keep the world economy from crashing.

We’ve been calling this yield-capping idea “curve control” in these Postcards. And it’s the reason I don’t suggest shorting government bonds – even though the federal government is completely broke, inflation is coming, and the Treasury has started defaulting on its debt.

The last time they used curve control was in World War II. The United States was fighting on two fronts and the government had to issue an enormous pile of bonds to pay for the war effort. To prevent interest rates from rising, the Fed said it would buy every 10-year Treasury bond at 2.5%. It then printed the money it needed.

This time there’s no world war. There isn’t even a recession. But we still have a trillion-dollar annual budget deficit and gigantic obligations to the military, social welfare programs, and $17 trillion in debt to foreign creditors.

What to Do Instead

A few months ago, I must’ve looked crazy to suggest they’d bring back “curve control.”

But on Friday, Fed Governor Lael Brainard, talking at a conference for economists, suggested the Fed should bring back curve control.

Also on Friday, a group of five economists – two from Wall Street and three from academia – released a paper recommending curve control.

Bottom line, curve control is coming during the next recession. I’m now certain of this.

The damage or the “outlet” for all this inflationary pressure will show up in the currency markets. There’s going to be a synchronized global devaluation. Gold has already started to sniff it out and has started to run higher.

My advice remains the same: Avoid stocks and bonds. Wait on the sidelines in gold until the storm has passed. 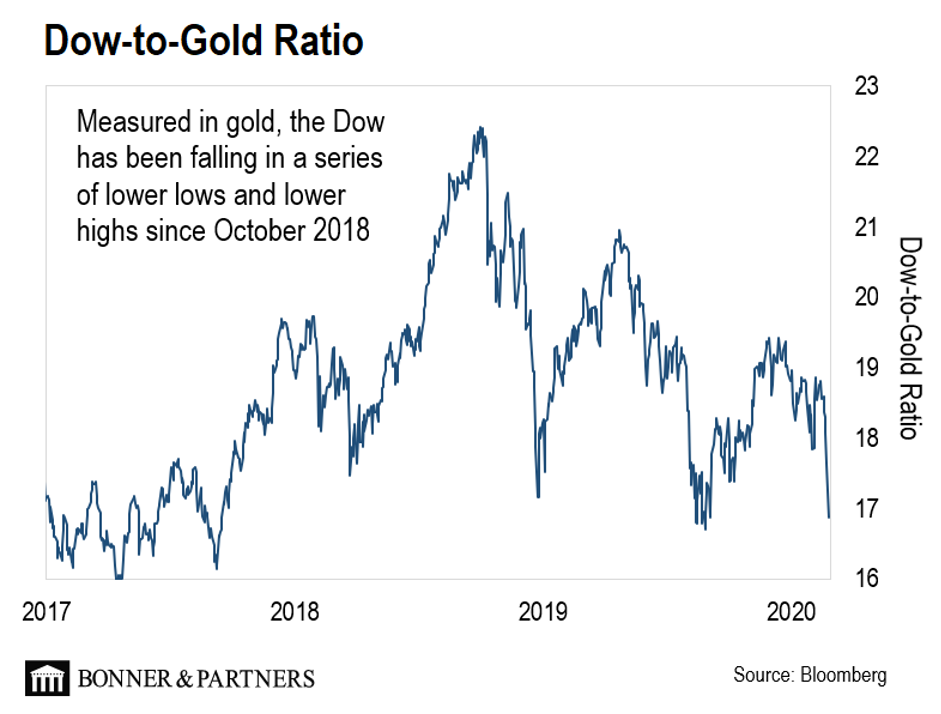 It shows the Dow Jones has been gradually falling in a series of lower lows and lower highs.

Homeschooling and (re)marriage tips in today’s mailbag… While some readers turn to gold – how to store it internationally, and whether its price could actually collapse in the next crisis…

Reader comment: I really enjoy the Postcards. It’s obvious you have quite the courageous family traveling alongside. All the homeschooled children I’ve ever met seem to be more sociable, polite, and intelligent than what our state schools are turning out (in general).

A couple other good quality sources for homeschooling would be the Ron Paul curriculum and a series of books The Tuttle Twins by Connor Boyack. Keep up the good schooling! It seems you guys are teaching them the most important lessons of all, the joy of learning and the ability to think critically for themselves.

Tom’s response: I’m familiar with both. We own the Tuttle Twins book collection. The boys have read them all.

Reader comment: I have to ask about this. You say you have everything in gold, but Harry Dent says that gold may rise a little from here but is going to collapse as this financial crisis comes about in the near future. So do you disagree with Harry?

I have enjoyed reading about your travels around the world.

Tom’s response: I can’t comment on Harry Dent’s research because I’m not familiar with it. My surest conviction is that gold will beat stocks and the Dow-to-Gold ratio will go below 5.

It seems far more likely that this will occur with gold between $4,000 an ounce and $10,000 an ounce, but I guess it’s possible gold could fall and my target for the ratio still gets hit.

The thing is, as I watch the Fed getting ready to print $5 trillion, I find that very improbable.

Reader comment: Enjoy your trip to Nicaragua, my wife and I found it to be delightful. The surroundings might look poor, but they seem a lot richer than we are here, certainly richer in tradition, faith, and family values. The U.S. media tries to scare us into staying on the plantation… Obviously you’re not scared.

Reader comment: You’ve had some readers ask about converting your gold to currency as needed. We’ve found it best to store ours Internationally in private vault(s). You can then easily sell or take physical delivery in any currency you need, based on current location. Generally, we have funds wired within two to three days of request. This also alleviates the worry of it being in possession and/or traveling with it. Safe travels, and keep the Postcards coming.

Reader comment: You wrote: “Kate and I are permanently unifying the family by getting re-married later this year.” For some time now I have been meaning to write and ask the totally unconventional question: WHY?

Your world journey and the changes that it made on all of you has already unified your family as much as possible. Marriage is a kind of *bond* artificially tying you all together, instead of letting you constantly evaluate the relationship and acting as necessary to keep it in a high state of success.

Once married, I am concerned that this constant requirement unconsciously will be perceived as not so necessary and will be ignored from time to time as other things are perceived to be more important. This sort of letdown will be even more likely as and when you start living a more normal life integrated with the society around you.

If you deeply think about the psychological differences between being married and not married, I think you will see that you, Kate, and family will be far more likely to stay unified if you and Kate are not married and are constantly working on that excellent unification that you both have now achieved.

Your thinking and actions are so “out-of-the-box” in so many ways (as are mine) that I hope you will seriously consider this unconventional idea. All the best for you and your family, whatever you do in the future.

Reader comment: Like many of your readers, I feel a kindred/family spirit with you and yours. Some are asking about your re-marriage. Perhaps you already know/understand what I am about to write.

Decades ago, I was going through a divorce and found myself sitting in front of a “judge.” That judge was about to decide what was going to happen with our child, who got custody, how visitation rights would go, and how assets would be divided. I naïvely asked what gave him (the judge) the right/power to make these decisions. I did not get a straight answer. In fact, I received no answer. Years later I discovered the answer through my own research. I had given the “state” the power (unwittingly) when I obtained a “wedding license.”

Today, people I know who understand this and wish to have a marriage ceremony find someone they feel share similar or the same spiritual beliefs to preside over the nuptials, “standing before (their) God” (without a state license) with witnesses present to exchange vows. They feel, in that state of awareness, their God (rather than the state), ordain and preside over their marriage.

For whatever these thoughts are worth… May your God continue to watch over and protect you and yours throughout all of life’s journeys.

Tom’s note: Thanks for all the thoughtful messages! As I wrote in detail here, your questions and comments are an integral part of these Postcards.